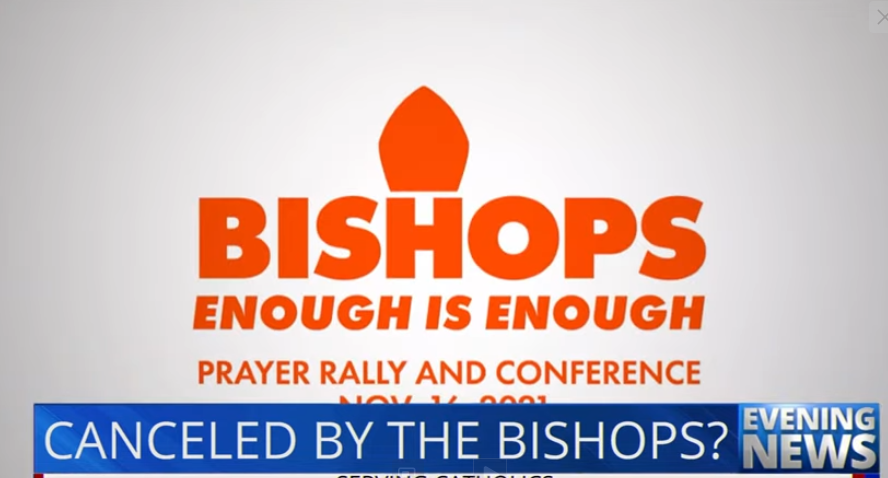 Michael Voris, ambitious leader of the Catholic conservative group Church Militant announced today the “Bishops Enough is Enough Prayer Rally and Conference” scheduled for November 16, 2021 is cancelled by the facility where the event was to be hosted. The prayer rally was to coincide with the annual US Catholic Bishops conference in Baltimore, Maryland.

Michael informs he spoke at length with Jim Shea, Baltimore City Solicitor, appointed to his role in December last year. Significantly, the reason for the cancellation is that the Church Militant group is found to be tied to the January 6, 2021 “insurrection” in Washington DC! Further, the group are deemed to “pose a risk and danger of violence”, Michael informs while announcing the cancellation of a planned prayer meeting. Reportedly Mr. Shea would not advise from whom nor which organizations exactly are making such allegations, and that he just made general assertions that information on the Church Militant group is “widely available on the internet”.

Michael said his staff spent hours scouring the internet to determine from where this information came, but nothing surfaced.

The event is planned to be at the same venue and occasion as an event held in November 2018, that also coincided with the annual US Bishop’s meeting, “Silence Stops Now” rally. Silence Stops Now was in response to the revelations that defrocked former Cardinal Theodore McCarrick was a serial homo-predator, sexually assaulted dozens of children in seminaries over the decades, and his activity was covered up for by multiple high ranking members of the US Catholic hierarchy. This week he was criminally charged with sexually assaulting a teenager in the 1970’s.

Appearing onstage during the 2018 event was one of Theodore McCarrick’s victims James Grein. Mr. Grein took the occasion for the first time to publicly reveal his identity, and was scheduled to appear praying for and denouncing US Bishops hierarchy covering up abusive violence to youth.

The Church Militant group quite arguably poses no threat of violence to the US Bishops nor anyone else. Saying Church Militant has a provable track record of non-violence, Michael asserts never has the group advocated for violence nor participated in any violence. They intend only prayer for an end to moral corruption in Catholic hierarchy and are gathering as Catholics speaking to Bishops.