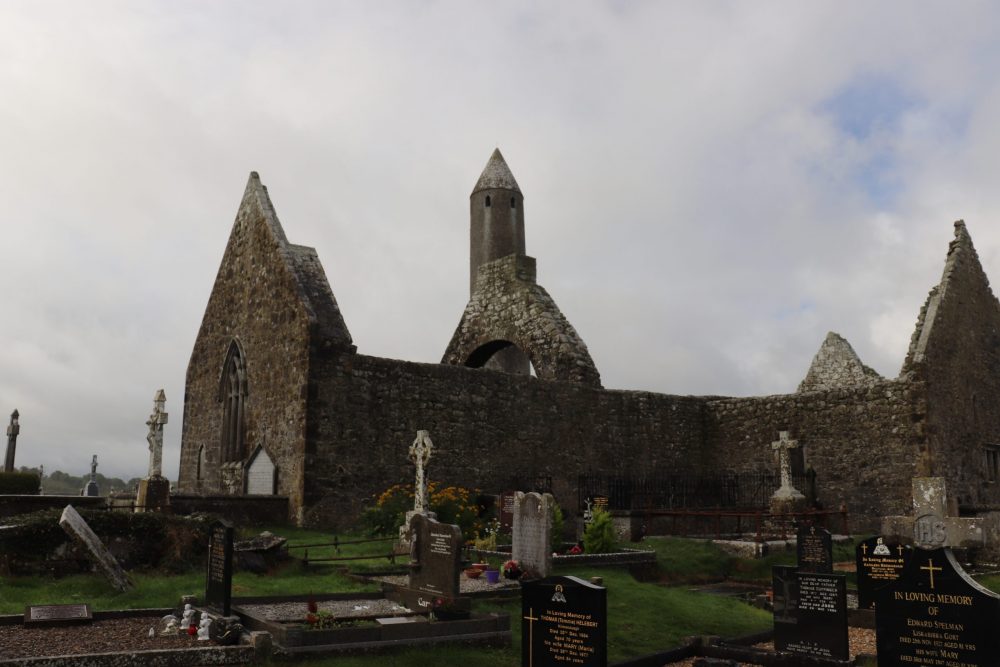 Kilmacduagh in south County Galway in Ireland features ruins of a monastery founded by St. Colman Mac Duach early in the 7th century.  This is one of the finest collections of monastic buildings in Ireland.

Island solitude long exercised a powerful attraction for holy saints.  Taking refuge in the barren, rugged and secluded shores of Aran Islands, Ireland, monks found their treasured life of poverty and seclusion.  “The booming of the ocean must have sounded in their ears as the solemn voice of Nature thundering forth its unceasing hymn to the majesty of its Creator.”

St. Ambrose says “In it those faithful and pious men found incentives to devotion.  The mysterious sound of the billows calls for the answering sound of sacred psalmodies, and the peaceful voices of holy men, mingled with the gentle murmurs of the waves breaking softly on the shore, rise in unison to the heavens.”

One of these enjoying the charms of such island sanctuary is St. Colman.

Some call the closing years of the sixth century the ‘golden age of Ireland’s holiness’, with writers refer to the period as brightness of that of the moon compared with that of the stars.

St. Colman Mac Duagh sought such a life of perfect solitude and seclusion to commune alone with his Creator.  A spirit of profound humility, he led a life of the highest spirituality.

During the last decade of the sixth century, St. Colman lived secluded in a hermitage in Burren for seven years.  Lent was conducted with the usual exercises of austerity – and on one Easter morning, after reciting the divine office and offering the sacred mysteries, he inquired of his youthful attendant if he had procured anything special for a sumptuous meal in that great and joyous feast.  His attendant replied that he had only procured a little wild fowl in addition to the herbs which were their usual fasting fare, and began to repine at the severity of a life which even on so joyous a festival brought them no legitimate relaxation.  He contrasted their position with that of those who had the good fortune of forming King Guaire’s household.  Saint Colman, seeing with concern his attendant’s patience was exhausted, commended the matter to God., and urged that the King of Heaven and Earth, whose servants they were, could easily supply a feast, and strengthen his attendants failing confidence, if such were His Divine Pleasure.  And as to Guaire’s royal banquet, referred to by St. Colman, and of which his chieftains and retainers were then about to partake, it might, if it so pleased Providence, be transferred from the palace to the hermitage.

The banquet was being set on the royal tables at Durlus while the Saint was yet speaking.  And there can be no doubt that it was a sumptuous one, and worthy of His Majesty’s characteristic love of hospitality.  The old writers recount important additions to the feast which had been procured specially for the occasion by the king’s huntsmen.  Before sitting down to the feast, the king exclaimed with unusual impressiveness, “Oh, would it pleased Heaven that this banquet were set before some true servants of God who require it; as for us, we might easily be provided with another.”  He had no sooner spoken than the dishes were removed by invisible hands.  All were struck with astonishment.  The king, amazed at the marvel, summons his mounted guard, that they may follow, and discover, if possible, the destination of the dishes.  All his retinue follow in haste, and are accompanied by a motley crowd of women and children from the district through which they travelled.  Meantime, the dishes had reached the Burren hermitage, and were set down in the open space in which the saint and his disciple were wont to partake of their scanty meals.  On seeing them, the disciple exclaimed, “O father, behold the reward of they patience!  Let us thankfully partake of the food sent us by our good God.”  Our Saint, however, would first know with certainty whence they had come, and is informed by an angel that the feast was sent in response to his prayers, and through the benevolence of the king.  Meantime, the unexpected arrival of His Majesty with his retinue and followers filled them with alarm.  Their astonishment at discovering the oratory and cell was increased by seeing the banquet spread before the holy hermit and his attendant,  who, with thankful hearts, and good appetites, were about to partake of the good things thus bountifully provided for them by Heaven.  But our Saint, with a full confidence in the protection of Heaven, commanded that his unexpected visitors should not approach till he and his disciple should have partaken of the feast so providentially provided for them!!

And here another marvel occurs.  Riders and pedestrians alike are unable to move!  The level limestone ledges bear to the present day the footprints as it is piously thought, of that motley gathering.  No doubt this singular phenomenon of the foot prints on the rocks must have been incredible in those days!  Nonetheless, the ascent through the mountain gorge is called to this day Bohir na Maes, the “road of the dishes”.

Thus did it please God to manifest in a most striking manner the singular sanctity of His servant to the king and the assembled multitude.  The favor which he found with God was thus manifested to the world, despite his humble efforts to hide himself, as well from the admiration as from the hostility of men.  At the king’s entreaties, all were again set at liberty through the Saint’s prayers; and they returned to publish throughout Aidhne the sanctity of the holy man, and the extraordinary things which it pleased Heaven to do through the efficacy of his prayers.

King Guaire Aidhne offered him a site for his monastery but the saint refused to accept it until he received a sign from God, which was that he should build it on the spot where his belt fell to the ground. This belt, adorned with gold and gems, was later held in the greatest honor. Many cures had been worked by it, and in harmony with the virtues of its original owner, it reacted to unchastity, for a person ‘however obese who had preserved his virginity unimpaired could close it round himself, but he who had in any respect violated his virginity, however tender his age, however slender, however lank, could never draw it on or close it” (Colgan, 1948, 246).

St. Colman’s austerities and his miracles were on the lips of all, and the king was urgent in his request that St. Colman should found a monastery, and also assume episcopal charge of the territory.  Thus it happened that St. Colman Mac Duagh’s jurisdiction extended over the entire territory of Aidhne, and the ancient boundaries of the territory continued in after times to mark the boundaries of the diocese of Kilmacduagh.